The Breakthrough by Jerry B. Jenkins-Review 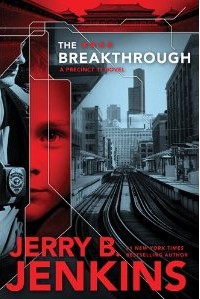 I thought early in this page-turner novel, that Boone Drake was a modern day Job. He lost his wife, son, home, faith, passion for his work and his purpose for living. A few years later God restored his life when Boone married Haeley and adopted her son, Max. He had a new home, renewed faith and a greater passion for his work. He was the youngest bureau chief in the history of the Chicago Police Department and headed the city's Major Case Squad. Things seemed to be going too well and Boone began to feel anxious, like something was about to go wrong. Could history repeat itself? His new family would be tested in ways few could survive. Yet at the end of themselves, God strengthened their faith as others stood with them.

Author of the best seller Left Behind series, Jerry B. Jenkins, has entered crime time with his 11th Precinct series of which The Breakthrough is the third novel. Boone Drake is an extraordinary cop. At times I would have lost control, coming face to face with people in a large human trafficing ring. I guess that's why I'm a Sunday school teacher and not a cop. Tears welled up as I read how money causes people to snatch up beautiful children and ship them off to distant places around the world.

Boone found himself in Beijing, China, a city ten times the size of Chicago, with a guide who spoke broken English but coordinated a sting in the nick of time. I learned some things from the people closest to Boone, especially his pastor. Like him, I've started texting scripture verses to friends in tough times. It seems so simple. Why didn't I think of it myself? Thank you, Jerry, for lessons in encouraging others through The Breakthrough. The book also made me think of my grandchildren and the children in my fourth grade Sunday school class--how precious they are and how we have to pray for God to help us protect them from tricks used in human trafficing. Although The Breakthrough is a must-read for parents, teachers and people in law enforcement, it is a novel you won't want to put down.

Thank you. You can preorder the book which will be released in September.

This is a GREAT review, Sue. Thank you. Now I've got to get the first books in this series.

So many books! So little time!

That's exactly what I did, and I'm well into the first book of the trilogy. Great book too.

Sue, wonderful review. This sounds like a book I would really enjoy; I'll be picking it up soon at Lifeway.

Hi Pat,
I don't know if it will be available at Lifeway. It will be released in September and you can purchase it on Amazon. Thank you for checking out the review.

Great Review, Mrs. Sue! Have you ever read Jenkins’ Though None Go With Me? It is a wonderful book—God used it to greatly encourage me during a trying time for our family.
I’m a Sunday school teacher, too! I have 1st through 3rd graders though! :)

Hi Princess,
Yes, I read Though Non Go With Me. It was the first Jerry Jenkins book I reviewed. I loved it too. You will really enjoy Jerry's new police series. Blessings to you.