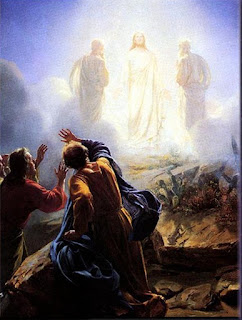 Have you wondered what God looks like? We have many pictures of Jesus, but which ones are right? The Bible gives us some great clues in the books of Genesis, Matthew and Revelation. I am amazed how similar the descriptions are.

Moses stood in the presence of God at the burning bush, but hid his face, afraid to look at God. When he came down from Mt. Sinai with the Ten Commandments (Exodus 34), his face was radiant from talking with God. The people saw and were afraid, but Moses called for them to come near.

Moses and Elijah appeared with our Lord Jesus at His transfiguration. "His face shone like the sun, and his clothes became as white as the light," (Matt. 17:2).

Check this out! On the island of Patmos, on the Lord's Day, John heard a loud voice like a trumpet behind him. It said, "Write on a scroll what you see and send it to the seven churches. He turned and saw seven golden lampstands, and among the lampstands was someone "like the son of man," dressed in a robe reaching down to his feet and with a golden sash around his chest. His head and hair were white like wool, as white as snow, and his eyes were like blazing fire. His feet were like bronze glowing in a furnace, and his voice was like the sound of rushing waters. In his right hand he held seven stars, and out of his mouth came a sharp double-edged sword. His face was like the sun shining in all its brilliance.

"When I saw him, I fell at his feet as though dead. Then he placed his right hand on me and said: "Do not be afraid. I am the First and the Last. I am the Living One; I was dead, and behold I am alive for ever and ever! And I hold the keys of death and Hades.

Application
The words in red letters are spoken by Jesus. The words in blue letters include descriptions of God's appearance. Is this not absolutely incredible? That is what's so great about God's word. We find nuggets of information in different books of the Bible that agree. It proves to me that our Bible is trustworthy and true.

Prayer
Lord Jesus, thank you for glimpses of You. To be honest, I would have been as afraid as John. Thank you for the encouragement You gave him (and us). We look forward to the day we see you face to face. Amen.

Email ThisBlogThis!Share to TwitterShare to FacebookShare to Pinterest
Labels: as white as snow, Elijah, Genesis, Matthew, Moses, Revelation, What does God look like? Jesus, write down what you see