Why Would a Loving God Allow This? 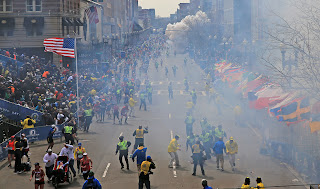 After the terrorist attacks of 9/11 and the Boston Marathon, many ask, "Why would a loving God allow this?" My question to them is, "Why do you blame God?" When He created man, He gave him a free will, to love Him or reject Him.

We live in a broken and hurting world. It's been this way since the fall of man in the Garden of Eden. Adam and Eve fell for Satan's lie that they could be like God. Man has rejected God's love and set themselves up as gods of their own lives. They have eliminated prayer from schools and other public places. So how can they blame evil on God?

God loved the world so much that He gave His only Son, so that whoever believes in Him will not perish but have eternal life (with Him), John 3:16.

You might ask, "Why do the good people get hurt along with the people who committed the terror?" Over and over again God has demonstrated that He can use evil for good.

A good example is Joseph, who was a good man, his father's favorite son. Yet his brothers hated him and wanted to kill him. Instead, they sold him into slavery where he was falsely accused and spent time in prison for several years. He could have retaliated, but he gained a reputation as a model prisoner. God used his ability to interpret dreams to rescue him from the dungeons. Joseph interpreted the King's dreams and earned the position of governor of the land.

During a seven year famine, Joseph's brothers came to him for food. They didn't recognize him at first, but he presented himself to them and forgave them. He told them, "What you intended for evil, God intended for good, the saving of all these people (Genesis 50:19).

Do you see the major difference in the way people responded in the two stories? There are those who react under the circumstances and choose to reject God. And there are others, like Joseph, who respond to God in the midst of suffering and reflect on His goodness.

What will you do? React and reject or respond and reflect?

Thank you, Holy God, that you are always with us, and that you will never leave or forsake us. Help us  respond to your love and to live under your will and purpose for our lives and not under our circumstances. Help us to rise above our anger, disappointments and suffering to reflect on your blessings in the midst of our challenges. Amen.

Email ThisBlogThis!Share to TwitterShare to FacebookShare to Pinterest
Labels: 9/11, Boston Marathon Terrorist Attack, Genesis 50:19, John 3:16, why would a loving God allow this? Why blame God?

I wrote last week that God didn't do this savage thing in Boston. Man did it.
Man was inhumane to man and God had to take three people home to be with Him because the three of them were hurt so badly.

Good writing, Sue, and to the point! I especially like your r-words in the last sentence.

Thank you, Quiet Spirit. I agree that these horrible acts are carried out by people who desperately need God. I'm praying for the families of those who went home to be with God.

Thank you, Susan, for your encouraging words. A different set of Rs than we usually think about. ; )