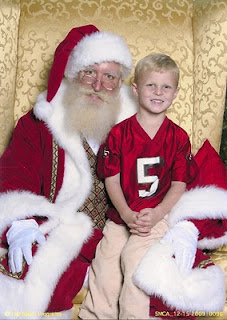 My five year old grandson Kurt saw Santa Claus. "Would you like to talk to him?" I asked.

"But there isn't!" I exclaimed. "He's waiting to talk with you." I don't know if this has ever happened in history that Santa had no waiting line. Maybe it's because we went when other people were eating lunch. Convinced that he wouldn't have to wait, Kurt went right up to Santa. He looked more grown up than five years old.

"What do you want for Christmas?" Santa asked.

"A smart scooter," said Kurt. That's all he said and he was quite decisive and businesslike. At home he and his brother and sister are filled with curiosity and anticipation as they consider the packages under the tree. All too soon the pretty paper and ribbon will once again be history, but I will ponder the excitement for a few more days.

While we celebrate Christ's birth, we anticipate His second coming, something He promised more than two thousand years ago. Many think because it's been so long that it won't happen, but God keeps His promises. Noah's neighbors didn't believe water would lift the ark, but it did and left many behind. Today thousands of years later a big boat rests on top of Mt. Ararat (in Iran), believed to be Noah's Ark.

The center of the world God created is Iraq, Iran, Palestine, Saudi Arabia and Israel. Many locations in the Bible are in these countries which have endured troubling times since the beginning in the Garden of Eden. Most Bible prophesies pointing to Jesus' return has been fulfilled. The unrest in the Middle East, the movement toward one world government, one currency and dictatorship set the stage for the Rapture when every knee will bow and every tongue will confess that Jesus is Lord. We will all see Him either by His grace or His judgment.

Do you feel your life out of control? Do you feel loneliness and despair? I did and I cried out to God. I found that He loves me with an unconditional and everlasting love. There is no better time than now to turn to God. He waits at the door of your heart for you to invite Him into your life. His love is awesome to experience. Don't wait another day.

Merry Christmas and may you anticipate Jesus' second coming with confidence and peace.
Posted by Sue Tornai at 3:21 PM